A VISION FOR EDENHAM: Goldfinger's housing at Trellick 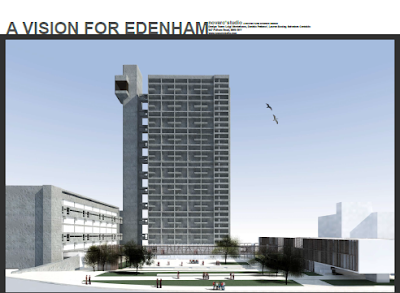 Text from Proposal to CLG for Neighbourhood Plan (not successful)

Councillors in Golborne Ward are planning a number of initiatives to catalyse economic and social regeneration in the area. These are all focussed on enabling residents, groups of residents and local businesses to work together in a variety of ways to ‘grow their own’ mixed and diverse communities via projects using their local knowledge, enthusiasm and experience to support or create sustainable change.

In early 2009 while the Council was first considering the future of the Edenham Residential Care Home site with a series of feasibility studies, Cllr EDC asked a local architectural practice (Novarc Studio, now LBMV Architects) to take on a project working with residents from Edenham Way to envision their own future for the site. As a former student and guest lecturer at the Bartlett School of Planning and Architecture, and as a former chair of a community centre in Bermondsey that was planned entirely by residents, Cllr EDC has some experience in community planning. The result, ‘A Vision for Edenham’ was launched in October 2009 and appeared in the architecture press and was widely publicised; the residents were delighted with the result.

At the time Cllr EDC had discussions with the following potential partners who all expressed genuine interest in bringing the project to the next stage: the PCT, who wanted to set up a Health Centre incorporating three GPS, dental services, and clinics treating prevalent health problems such as diabetes and circulatory disease; Octavia Housing, who were keen to investigate the possibility of a 40+ unit Extra Care Home; TMO, looking at various ways of developing Trellick Tower garage site to provide income for the HRA; and another housing partner whose name I have been asked to withhold. It has always been the intention to return to this project and take it further with a financial viability study; the main restraining factor was a lack of serious commitment from the Council.

Residents, potential partners and EDC are very keen to develop these early ideas into a Neighbourhood Plan. The Residents’ Association are very keen to get back to work on the scheme that they initiated with Novarc Studio in 2009. Meanwhile, the Council is proposing a scheme that proposes almost entirely private residential use, with no community facilities or space whatever.